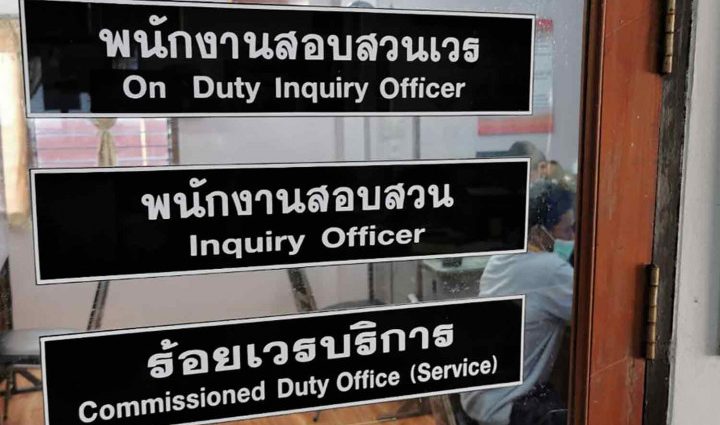 Urairat, 60, on the right seen through the door glass, is read the charges at Na Pho police station in Na Pho district, Buri Ram, on Wednesday. (Photo: Surachai Piragsa)

BURI RAM: A 60-year-old man accused of sexually molesting a neighbour’s 4-year-old girl has denied the charge and told police she tripped over a stick while walking with him in an orchard, which probably caused the bleeding found to her genitals.

Police at Na Pho station in Na Pho district on Wednesday charged the elderly man, identified only as Urairat, with separating a minor from her parents and child molestation.

They laid the charges after questioning the girl, her grandmother and other neighbours.

According to police, Mr Urairat said he had known the young girl most of her life and she had frequently visited his house. He admitted taking the girl to an orchard last Saturday, but denied he abused her.

He said she tripped and fell over a wooden stick while following him, and that probably caused the bleeding to her genitalia.

Her grandmother said the girl had twice cried and said her genitals hurt when she was bathing her over the past few months. At the time, she just thought the girl had injured herself while playing.

On Saturday evening the girl had cried again while being washed, but this time her genitalia were swollen  with signs of bleeding, the grandmother said.

She questoned the child, and she answered that the old neighbour had inserted his fingers and his “organ with hair” into her vagina. This had happened three times, at his house, in the forest and in a paddy field shelter, she told her grandmother, who looks after two young grandchildren.

The grandmother said she and her husband were farmers and her granddaughter usually played at the houses of neighbours and relatives in their village after school and on holidays.

The girl frequently went to the suspect’s house because he usually gave sweets to youngsters.

Other neighbours told police that they saw the suspect leading the girl out of their village last Saturday. Police were waiting for the report of a doctor who examined the girl.