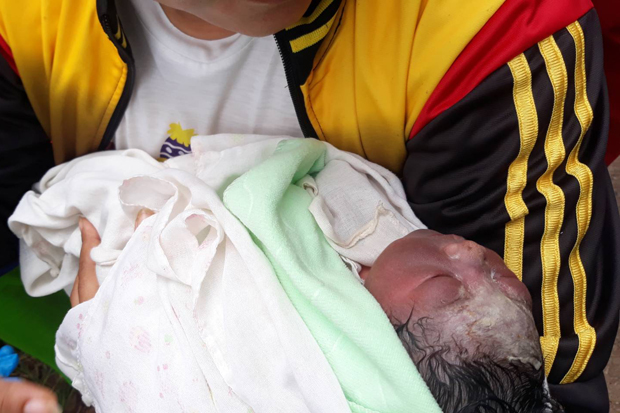 A rescue volunteer holds a baby in the arms after the young lady was found in the bushes in Muang district of Kalasin on Sunday. (Photo: Yongyuth Phuphuangpet)

KALASIN: An infant baby girl has been found abandoned in the bushes by a street in Muang region of this northeastern province on Sunday mid-day.

Sittidet Yosthongchai, a member from the rescue unit associated with tambon Phai, mentioned a villager noticed the baby on the roadside while driving home along the Kalasin-Somdet road.

The villager stopped the vehicle to take a close look and found it had been a baby girl who had been wrapped only with a white towel. The girl was still lively and believed to are actually dumped shortly after the girl birth.

He subsequently educated the rescue unit.

Rescuers went to the spot and rushed the baby to Kalasin Hospital.

The child was now in the care of the hospital, impending police investigation to find the mother and other people who might be involved in the crime.

Mister Sittidet said it had been fortunate it was not raining at the time.