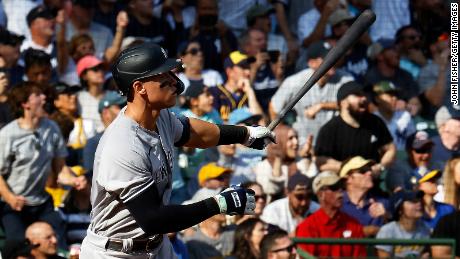 Judge is now two home runs away from Roger Maris’ single-season AL record of 61, which the legendary Yankee right fielder set in 1961, and is on pace to hit 65 on the year, which would be tied for fourth-most ever in major league history.
“It’s not too difficult if your main focus and your main objective is to go out there and win a game. The numbers, they’re just numbers,” Judge said per MLB.com after the win, which saved the Yankees from a series sweep and kept them first in the AL East.
“I’m focused on doing what I can to be a good teammate and help the team win. If that means hitting a homer, it means hitting a homer, but it’s never been my focus.”
The Brewers got off to a hot start when Kolten Wong hit a three-run homer to put them up 3-0 at the bottom of the first. Yankee Oswaldo Cabrera hit a solo home run at the top of the second to cut the lead, but it got put right back to three runs when Brewers outfielder Tyrone Taylor struck back with a solo homer at the bottom of the second.
Judge’s first home run of the day was a 414-foot shot to right center field at the top of the third inning, which closed the gap to 4-2. After a flurry of scoring, his second — a 443-foot bomb to left center field at the top of the seventh inning — helped seal the Yankees win.
The New York slugger went 4-for-5 with four RBIs on the day to raise his batting average to .316, just one point behind Minnesota Twins second baseman and AL leader Luis Arráez.
Given Judge’s sizable lead in both the American League HR and RBI categories, his inching towards a batting crown could lead to the AL’s first Triple Crown since Miguel Cabrera in 2012 and the Yankees’ first since the iconic Mickey Mantle in 1956, according to MLB.com.
“Sorry to repeat the same line, but it’s historical. I got nothing else for you,” said Yankees pitcher Gerrit Cole, per ESPN. “It’s the greatest offensive season that I’ve personally ever witnessed. I don’t know what else to say. I mean, it’s wonderful. I’m riding it, dude. It’s amazing.”
The Yankees have a six-game home stand beginning on Tuesday, with two games against the Pittsburgh Pirates and four against bitter rivals the Boston Red Sox, and Judge only had one thing on his mind after the game. “We’ve got some big games coming up. That’s really the only thing on my mind right now,” he said.
“We’re in a pennant chase, and Judge sitting where he is, so there’s gonna be that added buzz every time he comes up,” Yankees manager Aaron Boone said after the game.
“I experienced that playing in the NL Central playing against Sammy [Sosa] and McGwire in ’98 where it’s like every time — it’s an event,” Boone continued. “And I think the fact that we’re where we are in the pennant race and what he’s doing hopefully should create for an awesome environment at [Yankee Stadium].”
2022-09-19
Previous Post: Thaksin, 16 years on: Coup was a stab in the back
Next Post: Racist chanting mars Real Madrid’s 2-1 derby victory over Atlético Madrid